The two major airlines serving New York Stewart International Airport, Jet Blue and Allegiant are both positioning themselves for surviving unprecedented financial turmoil from the economic fallout from COVID-19 pandemic.

This proposed $50 billion bailout of airlines by the Trump administration includes a survival lifeline for Jet Blue, the popular airline that helped Stewart International survive the recent loss of the wildly popular Norwegian Air whose own money troubles forced it to leave Stewart for overseas destinations.

The new stimulus bailout rules say airlines only need to serve one airport per city.

So Jet Blue has decided to serve JFK and Newark, while suspending service at LaGuardia and Stewart and Westchester airports with no date given for returning to Stewart.

Meanwhile, Stewart’s only other regular airline, Allegiant, has placed an immediate moratorium on all “non essential capital spending and discretionary spending.”

“With these initiatives we believe we are well positioned to mitigate all our non-essential capital spending and discretionary spending,” Allegiant says in a news release.

Some company officials are not even drawing salaries.

There is also a company hiring freeze.

Also, Allegiant is suspending as much as $320 million in planned spending for the planned Sunseeker Resort in Punta Gorda, Florida.

The Allegiance’s company board of directors is also deferring salaries.

And 700 company employees have taken voluntary 60- day leaves without compensation.

Ulster County Sheriff Juan Figueroa informed the Lloyd Town Board on steps that his department and the Urgent Task Force is taking to combat the burgeoning opioid crisis that is facing the county. …
COVID resurgence After a lengthy discussion at last week’s meeting, the Marlboro Board of Education voted 4 – 3 to remain closed immediately following the Thanksgiving break, providing a period of …

Hinchey declared winner in 46th Senate race On election night it looked like Republican Rich Amedure was going to beat Democrat Michelle Hinchey for the open NYS Senate seat for the 46th district. That evening Amedure had 66,784 votes to …
Plattekill initiates police reform committee Last week the Plattekill Town Board opened a discussion on their new Police Reform Collaborative Committee, which Governor Andrew Cuomo has mandated that towns and municipalities create to address …

Lack of holiday travel leaves Stewart carriers blue Stewart Airport, which is run by the Port Authority of New York and New Jersey (PANYNJ), has seen a hit in its airline travel, along with many other airports across the country and globe. During …
Local News

Orange County Clerk Annie Rabbitt announced on Tuesday, November 17 that she will not seek a third four-year term in 2021. “My career in public service has been the experience of a …

This Thanksgiving, due to the COVID-19 pandemic and advisory guidelines urging families to limit the size of gatherings, many may find themselves tasked with cooking a turkey and all its fixings for … 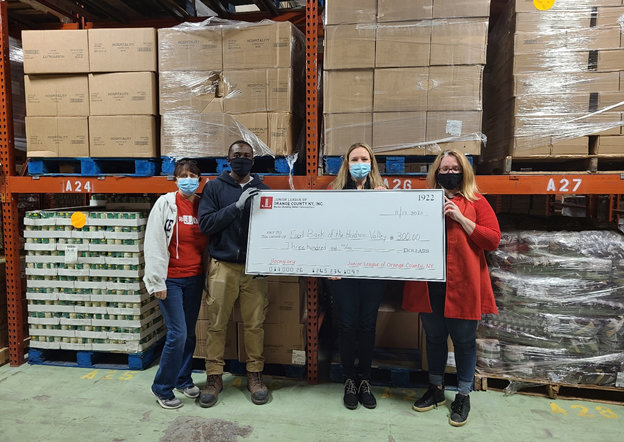 Junior League volunteers at Food Bank of the Hudson Valley

On Saturday, November 14th, active members of the Junior League of Orange County (JLOC), along with provisional members and friends, volunteered at the Food Bank of the Hudson Valley. Volunteers …